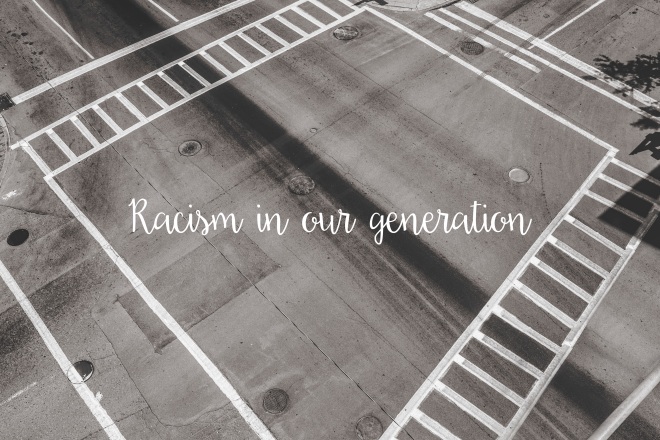 Imagine a 10 year old describing people based on height, weight, hair color/style, and sex as identifiers, but never race. When his mom asks he states they are lighter/darker/same skin color.

I read this in a comment on-line earlier today. Don’t you love the way she described his unfiltered view? It’s a strong indicator she and his school are doing a fantastic job of making sure diversity in skin color isn’t the primary thing that makes people different from one another. We are different! It makes me long for a day when we celebrate those differences as a reflection of the creativity of our Creator.

The anecdote made me recall an incident about 20 years ago when a friend and I were involved in an altercation with an employee at a chain restaurant. When my friend later described our run-in, she used every description except race. I realized then if it had been me recounting the incident, race would have been the first word I used to describe that person: because she was a different race.

Undoubtedly, racism is taught. It starts with the words parents use. Language is learned at home. Children learn all sorts of slang from their parents like the common phrases and their appropriate use here in the South such as ‘y’all’ or ‘fixin to’, and pronunciation like ‘Linder, get me a glassa wahtah then pahk the cah in the yahd’ (Linda, get me a glass of water then park the car in the yard) in the North.

Racial slurs are taught too. In elementary I knew many epithets for African American, Asian, Latino, Jewish, Italian…. Indeed, every year at school I had a relative ask my sister and me if we had black kids in our class. By the time I was a freshman in high school, I was trying to count how many black kids were  in the school because I knew the question was coming. I even found myself trying to under-estimate the number because I felt the need to defend my school.

My point? Words mean things. Language matters. The words we know fill our inner dialogue. As time moves further away from the civil rights movement, we continue to make strides towards changing how we talk and how we think. Each generation learns language anew which becomes the framework of their thinking.

My grandparents used ‘white only’ bathrooms. My mother-in-law was on campus when James Meredith came to Ole Miss escorted by armed guards. Part of the reason I connected so well with my husband was because we share a common background and yet we had separately made decisions NOT to continue in the racism we had seen to varying degrees. Our siblings had both made those decisions. In my experience, many from our generation want to set it aside. Partially we have arrived at this point by realizing how ugly hate is and partially because segregation has already happened so we have darling friends of different races. This decision came before we were followers of Christ.

Now as we age, we have to battle cynicism in ourselves, our peers, and elders. It is a sickness that taints our thinking. It is the root of so much bitterness including and especially racism. It is fought by being careful about the words we say/read/think. There is so much propaganda from so many radical views and we all have access to it.  Like you, my newsfeeds are filled with very little original thought, mostly re-shared links. Regurgitation.

Since I became a believer and disciple of Jesus, I have learned more than just ‘hate is ugly’ or ‘individuals of a different race are nice’. I have learned real compassion. It’s plain to me that ALL people are created in His image. They have a high value and I will esteem them as such.

So, who is to blame for segregated churches?

It’s always shocking to me how, historically at least, the church and individual members have lost sight of the gospel message. The one that says we are all sinners in need grace. Because of the cross of Christ, we have been forgiven. I know there can’t be casting of stones when I am so wretched. In light of the generosity and mercy I have experienced, how can I do anything less than love with abandon?

My prayer is for many to be filled with compassion. What hope we have in that! There will be less finger pointing and blaming. There would be fewer people demanding their own way, instead in humility we’ll treat others as more important than ourselves. (Phil 2:3-4)One of the best worship services I ever attended was in Central America. There were men and women of many different ethnicities singing together. It was a picture of heaven!

It was also high hilarity from a person who spends a lot of time thinking/praying/discussing worship services as a church staff member. The pastor was also the worship leader. The sound equipment was on stage. During a few songs, he’d just walk over and adjust something on the board…and just kept on singing. Their percussionist was about 8 years old and had no rhythm. Everyone in the congregation sang LOUDLY and clapped to their own beat. A couple of teenage girls in matching dresses waved some long scarves during the music. Most of the congregants sang in a different language. By the time I recognized the tune, I added my voice in English just as loud. A beautiful, Holy-Spirit filled cacophony!

So why would I call it one of the best? Because we weren’t there as a consumer. We didn’t come looking for what the church could do for us. We came to GIVE our worship. We sang in response to what has already been done! Do you see the distinction? Thom Rainer describes it in his brand new book I Will, calling it a  “terrible shift to the preference driven church”. He says “the focus in too many of our worship services is not on God. We are focused on our own selves, our own needs, and our own preferences.” If you don’t think you are guilty, ask yourself the last time you had a bee in your bonnet about the music style, the pastor’s preaching, your comfort, your seat, etc. Can you see how a shift in attitude, aligning more with the early church would radically change our lives? Look at how God added and multiplied the pouring out of His Spirit in those days! It is still happening all around the world. We have the chance to be part of that movement! Rainer’s solution is to have the right attitude, one of gratefulness and joy and to follow it up with actions. I will. I will love. I will live it. I will leave that legacy in my attitudes, words, and actions.

This week racism is on my mind more than other weeks because we talked about it at Gateway this week in a message titled Race and the Power of the Gospel. Don’t read more into anything I say here. I’m speaking plainly, so don’t try to take more or less from my point than what I write. This is an on-going discussion, I don’t claim to have all the answers, but the gospel is the starting point.

What are your thoughts? Cancel reply